Have you learned the section on how oil and gas are made and trapped? You need that information before any of this will make much sense..!


What the Syllabus Says - and the Details

There are technological difficulties and environmental issues involved in exploring for and extracting oil and natural gas. This makes oil exploration difficult and expensive - as the environments you're likely to be hunting for oil and gas in include; sandy deserts of Iraq, icy deserts of Alaska, stormy seas of the North Sea and hot humidity of the Niger delta in Africa - the equipment has to be built to withstand the conditions or it stops working and you make no money. You'll also have problems with wildlife habitats and unfriendly political regimes.
Geologists prospecting for new reserves use a variety of techniques including mapping and making cross sections. You need to be able to interpret data from these maps and cross-sections to identify possible gas/oilfields (on-shore and off-shore).
First - MAPS
In the work on traps we found we will need a porous rock like sandstone as a reservoir rock and an impermeable one such as shale or salt to act as a cap rock. We'll also need evidence that there could be trap structure such as a fault or an anticline. If the map shows all of these things - buy the mineral rights to the area!
The simplified map below contains the right elements. What are the key bits? Is this bit of Poland any use..?
...The symmetrical structure shows a fold with the oldest rocks in the middle - so this is an anticline.
...There are sandstones (good reservoir rocks) and shales (good cap rocks).
...There is shale on top of the sandstone - so there could be an anticline trap here.
In fact this is a very good - it's the Bobrka oil field from which over a million tons of oil have been removed since its discovery in 1937.
Second - CROSS SECTIONS
The cross section below is more complicated than you would get on the exam but it shows various traps. Find an anticline trap. Find a fault trap. 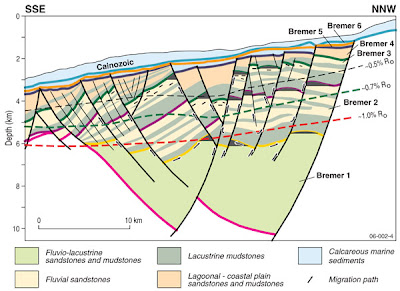 The cross section below is more the right level - rather easier!

Geologists will also use geophysical [seismic] techniques. You need to be able to interpret data from seismic surveys to identify possible gas/oilfields. These tend to look like lots of grey lines to start with - so it helps to know what you're looking at...
The seismic survey is done by making a series of very loud bangs, using compressed air if you're at sea or explosives if you're on land. The sound waves which are made reflect off the rock layers in the ground and are detected by hydrophones (at sea) or geophones (on land).
The information from the geophones (or hydrophones) is then fed to a computer which uses the time delay between when the 'bang' was made to when the 'echo' was detected to work out how deep the sound wave must have gone into the rocks. Echoes come from the boundaries between rock types so we can use the information to build up a picture of where these boundaries are underground.
Click here for a nice animation showing this happening.
The diagram below is typical of what these look like - the strong reflection lines (heavy black bits) show where the rock boundaries are. 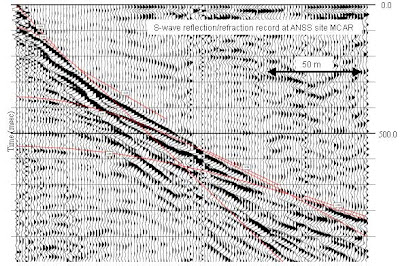 The seismograph above wouldn't get oil exploration geophysicists very excited - no obvious trap features are shown. The ones below would!
Seismic Survey 2 is typical of the sort of thing we are looking for. Once you've seen what to look for on the lower picture, you can see the anticline structure and the two faults on the upper one. This would definitely be an area where drilling a test borehole would be a good idea - assuming that there are sandstones to be reservoirs and suitable cap rocks. Now you just have to deal with the cost, the environmental issues, the technological problems...